Saburo and Toshio Watanabe celebrated their 45th anniversary hosting the Takarazuka festival in Sanda City, Japan this past weekend. The pair have run B.O.M. Service (Bluegrass and Old Time Music) in the nearby city of Hyogo since 1972, selling American and European bluegrass CDs via newsletter and online. Sab also publishes a popular Japanese bluegrass magazine, Moonshiner.

Both were members of the iconic band, Bluegrass 45, who became a huge hit in US bluegrass circles when they toured here in the 1970s. Natural entertainers, the then young lads won over American festival audiences with their enthusiasm and their humorous play on the cultural differences between our nations. Plus, they could really pick!

Toshio offered this brief description of the festival, along with a couple of photos.

“We had near 120 bands and friends get gather for 4 days from all over Japan, Korea, Australia US, etc. It looked like a big pickin’ party and the Bluegrass 45 did a reunion. Noam Pikelney appeared informally as well.” 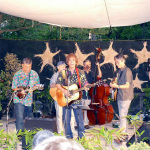 He also shared this video of 55 different banjo players trying to play Foggy Mountain Breakdown with one hand on their instrument and the other on the picker’s to their left. Fun!

2017 will be the 50th Anniversary of Bluegrass 45, and Toshio says that there will be a new album and a documentary film, plus tours in Japan and the US.