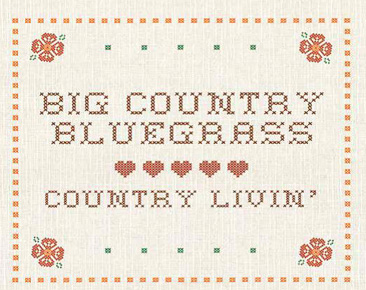 If you ever want to fire up a room full of bluegrass fans, just ask them to define traditional bluegrass. Some will define it as the original 1945-46 Blue Grass Boys. Some will expand it to include a few second generation acts, while others will broaden the spectrum to today’s popular “modern traditional” bands. Amongst the discussions of dobros, harmonies, and the relative importance of the five-string banjo, anyone would be hard pressed to deny that the music created by Big Country Bluegrass is about as traditional as it gets. For those who wonder if there is still a place for solid traditional bluegrass today, look no further than the group’s latest album from Rebel Records, Country Livin’.

From the first notes of lead single (and recent chart-topper) The Bluefield West Virginia Blues, it’s apparent that listeners are in for a good time. The musicians are energetic and the sound is tight, guided by Lynwood Lunsford’s banjo and Eddie Gill’s strong lead vocals. The song came from the pens of Tom T. and Dixie Hall, along with co-writer Troy Engle, and it’s a fun number about a musician recalling a fine banjo performance he once heard. Also from Tom T. and Miss Dixie is The Hound Dog from Harlan, a story song about a chance encounter with a sad-eyed dog, given an earnest reading by Gill.

Easy Memories is an enjoyable, bouncy number in the fine bluegrass tradition of thinking back on childhood and home. The upbeat title track also celebrates the simple life in the country, listing off images like hay rides, sitting on the porch, treeing coons, and mama’s fried chicken that will likely be familiar to many listeners. Rhythm guitarist Teresa Sells takes the lead on The Cotton Mill Song, which gives a more specific setting to the childhood memories theme. Sells’ delivery is straightforward and it’s easy to believe she’s singing about her own past.

My Heart is Like a River is a nice addition to the canon of she-done-me-wrong songs. Written by Dale and Connie Morris, it starts out sad but ends on a hopeful note as Gill states in the last verse, “I’ve lived and learned, I’ll find somebody new.” Blue River is a highlight of the album, with excellent fiddling from Tim Laughlin, a driving, pulsing rhythm, and confident vocals from Gill. Also enjoyable are the pair of Jimmy Martin songs that close out the record. Both Snow White Grave and My Lonely Heart are very obviously influenced – both instrumentally and vocally – by Martin’s versions, though perhaps sped up just a bit.

Country Livin’ is the eighteenth release from Big Country Bluegrass, which got its start in the 1980s. Bluegrass music has certainly expanded its scope since then, perhaps culminating in today’s “big tent” view, but Big Country Bluegrass has continued producing straight ahead, hard-driving, and yes, traditional, bluegrass. The musicians in the group are all skilled in traditional instrumental and vocal techniques, with particular focus on Lunsford’s banjo, Laughlin’s fiddling, and the Monroe-inspired mandolin of Tommy Sells. Gill and Teresa Sells on guitar and Tony King on bass provide a solid rhythm section, as well.

When I review more progressive or folk-influenced groups, I often write that their music is good, but perhaps not for everybody. The same could apply here too, I suppose, because the music on Country Livin’ is just about at the opposite end of the spectrum from those progressive groups. However, if you’re looking for fresh traditional grass, or even just something that wouldn’t make Bill Monroe say “that ain’t no part of nothin’,” this is it.

For more information on Big Country Bluegrass, visit their website at www.bigcountrybluegrass.com. Their new album is available from a variety of online music retailers.