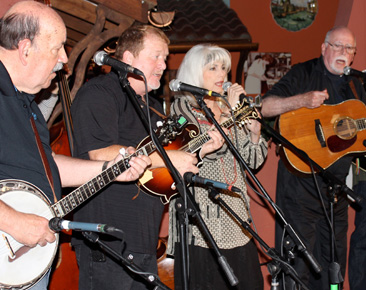 Novelist Thomas Wolfe was wrong. You can go home again.

The Seldom Scene proved it Sunday night, returning to the venue that provided the seminal band’s first home more than 40 years ago for a show that included current members and the surviving founders, along with tributes to those who are gone.

Sure, the Red Fox Inn is now an Italian restaurant in the Washington, D.C., suburbs, and the stage was set up at the opposite side of the room from where it once stood. But some things never change, including the Scene’s banjo man. Ben Eldridge, whose basement housed the jams that led to the formation of the band, has held that job for 42 years.

The evening was put together as a fund-raiser for the D.C. Bluegrass Union and only 100 lucky people got in the door, promising an intimate evening that recreated the weekly shows the band used to put on there.

The stories were just as good as the music. Over there was the jukebox. Remember the night Linda Ronstadt climbed on top to listen to the band? What about the night she walked in with Lowell George and Scene frontman John Duffey yelled from the stage, “Charge them double?” Does anyone still have the gaudy polyester pants the band wore for an early album cover? (Thankfully, the answer to that one appears to be no.) Remember when Emmylou Harris used to drop in to sing?

Well, there’s another thing that hasn’t changed. Emmylou dropped by to sing Sunday night, too, much to the delight of the crowd. Many ticketholders knew there was a surprise guest, but didn’t know who it would be. The first hint was dropped from the stage, when founding members John Starling and Tom Gray, joined by current member Lou Reid, changed the final chorus of Hello, Mary Lou to “Hello, Emmylou.”

And then, just like that, she was on stage and the trip back through time was complete.

“I learned a lot,” she said. “My good friend John (Starling) and the Seldom Scene gave us a wonderful musical education. So when John told me about this, wild horses couldn’t keep me away.”

Whenever the Seldom Scene is on stage, humor is always close by, and this show was no exception. At one point between songs, Harris strummed her guitar and asked, “Am I in tune?” Eldridge shot back, “Close enough for bluegrass.”

But the best line of the line was delivered by Akira Otsuka, who played a mandolin that Duffey gave him before he died. As Harris stepped off the stage and he stepped on, Otsuka said, “Tomorrow morning when I get to work, I can tell my co-workers that Emmylou opened up for me.”

The musical portion of the magical night opened with the three surviving founders, Eldridge, Gray and Starling, stepping onto the stage. Over the course of the night, the cast of characters shifted constantly (at one point in mid-song, as Starling sang a verse of Old Train, then gave way to Dudley Connell, just in time for him to pick up the lead).

“It’s going to be a lot of fun,” Starling said at the outset. “It’s going to be a NASCAR race, with a little wreck here and there.” There were a few of those, but they were, indeed, little. When you forget the third verse of a song that you haven’t performed in many years, as Starling did, you just stretch out the instrumental break a bit, then sing the first verse again. When the harmony singer starts a song-opening chorus and the lead singer doesn’t, you just stop, laugh and start over.

The band played many favorites from its deep catalog, including the instrumental gem Lorena, done as a tribute to the late Mike Auldridge, Walk Through This World With Me, which Starling dedicated “to the Seldom Scene ladies who put up with our crap over the years,” Bob Dylan’s Boots of Spanish Leather, and Gram Parsons’ Hickory Wind.

But two electric moments stood out above the rest. The first was when Gray, the band’s original bass player, took three solos on Grandfather’s Clock, with each more intricate and with him becoming more animated. The other was when the band came back for an encore and delivered a tender yet powerful rendition of Wait a Minute, with Reid, Connell and Starling trading verses and Fred Travers swapping in and out of harmonies with the other three.

And then, all too soon, it was over. There were planes to catch or long drives home. Pesky day jobs. Health worries. Bills to pay. Reality, in other words.

But for a few hours on a chilly Sunday evening, everyone was young again, the band and the fans. The past and present got together to make beautiful harmonies and to dust off old memories. And maybe, just maybe, make some new ones.