Last night, I had one of Nashville’s hottest passes in hand – a ticket to see country superstar Alan Jackson make his debut bluegrass music performance at the Station Inn. As I waited in line for the doors to open, I spoke with people who had stood in line from Sunday at 11:00 pm until Monday afternoon at 1:00 – fourteen hours – to get tickets for what seemed like a once-in-a-lifetime concert, where fans for a mere $25 could see not just Jackson, but some of bluegrass music’s best instrumentalists and vocalists.

Jackson was accompanied by the stellar crew of musicians who backed him on his upcoming The Bluegrass Album: Tim Crouch (fiddle), Rob Ickes (dobro), Adam Steffey (mandolin), Sammy Shelor (banjo), Tim Dishman (bass), Scott Coney (Jackson’s regular guitar player), and Ronnie Bowman and Don Rigsby contributing harmony vocals. The group played through the songs on Jackson’s new album, ranging from new tunes to a few older classics. The crowd seemed excited and energized throughout the show, captivated by the top-notch music coming from the stage. I think I even saw a member of the MOB there – Del McCoury, that is. The musicians were just as into the performance as the crowd was, and even exchanged a few humorous jabs at each other. At one point, Jackson glanced at Adam Steffey, who was retuning his mandolin, and joked “So, you finally going to tune that?”

While all the songs played were well done, a few seemed to really capture the crowd’s attention. Blacktop, a strong new modern traditional-sounding tune which Jackson contrasted with all the “dirt road” songs recently popular in country music, brought the crowd to their feet, while the closing tune, Blue Moon of Kentucky, earned an invitation for the crowd to sing along on the last verse and chorus – something Jackson said he rarely does. Like many bluegrass artists, Jackson said that he wouldn’t have felt right doing a bluegrass album without honoring the father of bluegrass music, and he picked one he was already familiar with and had done in his own country shows lots of times, especially in the Bluegrass State of Kentucky.

He also mentioned that he had two music videos in the works for the album, and I suspect that Blacktop will be one of them, if the intense videography at last night’s concert during that song has anything to do with it. In fact, the entire show was recorded – both audio and video.

Eddie Stubbs served as the MC for the concert, which was also broadcast live on WSM. Near the end of the show, Stubbs thanked Jackson for choosing the Station Inn (arguably one of bluegrass music’s most prestigious stages) for his debut bluegrass performance, and Jackson replied that “We could have picked a lot of cool places in Nashville to play this thing, some bigger, nicer places, but this was a historic place… I wanted to do this album of country music about bluegrass, and I think it’s [the Station Inn] more a part of bluegrass than a lot of Nashville.” While Jackson has played some of the world’s biggest arenas, he said he felt more nervous taking the stage last night than he had playing for more than 10,000 fans.

At one point, Stubbs remarked that although Jackson had said he was trying to do things that bluegrass music fans would like, the crowd at the Station Inn seemed to simply like Alan Jackson, no matter what type of music he played. Many of the audience members did seem to be Alan Jackson fans, rather than the fans of bluegrass who make up the Station Inn’s usual crowd, but anyone who might doubt Jackson’s embrace of this new genre only had to listen to the man himself.

“It’s so nice about fans like you all, especially in bluegrass, you really appreciate all the picking and playing,” Jackson told the audience. “Bluegrass is getting to be one of the last real American musics. There’s real melodies, real singers and harmonies, and real pickers. You know, I love that part of it.”

While only around 200 people were able to attend last night’s show, those eagerly anticipating Jackson’s new album shouldn’t feel left out. When asked if he was going to tour in support of the album, Jackson told the audience that if people liked the record, he would feel obliged to do so.

Alan Jackson has long been on top of the country music world, and if last night’s show says anything about it, he’s soon going to be just as welcome in bluegrass. He is sincere, talented, and most certainly respects the genre and those who perform and listen to it. 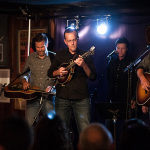