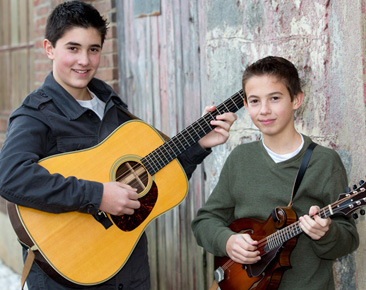 The Lilly Brothers and, contemporaneously, the Gibson Brothers and the Spinney Brothers have shown that talented musicians who play and sing in the traditional mountain style with verve and intensity don’t have to come from the Blue Ridge mountains of Virginia.

The Zolla Boys, Ben, aged 15 years old, and Sam, 14, are from Torrington, in the north-west corner of Connecticut, have the potential to follow such illustrious names as popular entertainers with a broad fan base.

Their singing is natural, with sibling harmonies the essence of each and every performance. The instrumentation is precise during their breaks and neat and tidy in support of the vocals.

Eric Gibson is buoyed by what the Zolla Boys have to offer …..

“The Zolla Boys give me great hope for the future.  I don’t mean to put any pressure on them, but if they keep working hard and having fun, I think their music will take them far. Sam and Ben have the fire. It will be fun to see how they use it.”

Ben, now aged 15 years old, speaks of his childhood, as the brothers trace their musical journey …….

“Since I was born, bluegrass was played in our home. I had a radio in my room and my parents would put me to sleep by playing The Cox family and Alison Krauss CDs. We went to many festivals and our dad was always singing and playing guitar and banjo.

Our family loved having house shows, where we would hire a professional band to play at our house. When I was 11, during a house show with Frank Solivan, a friend of my dad’s gave him a hand-made 7/8 mandolin and told him that one of us kids might want to learn to play it. I called dibs. We researched online lessons and found Mike Marshall through ArtistWorks.

(Ben) Once my brother had an instrument, I thought I would like to try to learn too. I really liked the sound of the fiddle and thought I would like to learn that, however my dad thought it would be easier to learn guitar first. He started me out with a Takamine 000 that had belonged to my grandmother. I learned a few chords and then signed up with online music classes. I made my first submission to Bryan Sutton through ArtistsWorks when I was 12.

(Sam) After about a year with ArtistWorks we decided I was ready for a new mandolin. I have so many mandolin players that I just love, Jesse Brock, Frank Solivan, Chris Thile but I would have to say Adam Steffey has been always been my favorite. We researched what mandolins he plays and we came across Northfield Mandolins. When we called them to see where we could try one out in our area something wonderful happened. The timing was perfect. The demo mandolin that Adam Steffey plays in the videos was sitting in the Northfield shop and the owners were willing to sell it to me. It is serial #F0001 the first instrument made in that F5 series. Even though I am only 14, I have tried out a lot of mandolins at music stores, festivals and other musicians’ instruments and I still love mine the best and wouldn’t trade it for anything.

(Ben) I now own a Martin D28V and I am so happy with it. We played in jams at festivals and tried to learn as much as we could in those weekends. We started singing together pretty quickly after that first year. Our dad would teach one of us the lead and the other the tenor. It was tricky at first but once we got it all the other songs were pretty easy. My musical influences were/are Tony Rice (of course) and Bryan Sutton. Both of our favorite bands today are Balsam Range, the Gibson Brothers, Steep Canyon Rangers, Special Consensus, Del McCoury, Hot Rize and so many more.

(Sam) Although we are big fans of so many different bands, we play a quite a bit of old brother duets. We love the Louvin Brothers, Jim and Jesse, the Blue Sky Boys and the Everly Brothers.

(Ben) In June 2014, we entered into a band contest at Jenny Brook Bluegrass Festival in Tunbridge, Vermont. The winner of the contest would win a spot Sunday on the main stage. It was our first time to Vermont and we had a great weekend. We did win the contest and it was a thrill to perform for such a great bluegrass crowd. We also got to jam with the Boxcars during the open jam session which was awesome!

(Sam) After the jam, Adam Steffey told me to find him at the festival the next day and that he wanted to play with me. I did and it was the greatest day ever! He is as great of a person as he is a mandolin player! After Jenny Brook, Grey Fox asked if we would play on the emerging artist stage. From our view it doesn’t get any bigger than Grey Fox, so we were thrilled! Then it just started happening, little by little we would be adding another great festival or venue to our schedule. In 2015 we played the main stage at Joe Val, Strawberry Park, Jenny Brook, Grey Fox, Podunk and Blistered Fingers.”

The Zolla Boys have very supportive parents and dad, Larry, has actually become a member of the band, initially playing guitar and now playing upright bass. Well, the boys do need a driver!

Mum, Amanda, attends to the bookings and does the photography.

Larry grew up listening to folk/country rock, to John Denver and the Eagles among other notables, but when he heard some old Osborne Brothers records he was immediately attracted to bluegrass music and the banjo. He got his first banjo for Christmas when he was 14 and he took lessons at a music store in town.

A visit to what was back then was called The Berkshire Mountains Bluegrass Festival (Winterhawk /Grey Fox) sealed his love for bluegrass music once and for all. He remembers, “I heard Jim and Jesse singing Paradise (John Prine) and the harmonies just struck me.”

The habit, stimulated by attending the Winterhawk festival for 25 years in a row, is one that both parents have encouraged in Ben and Sam and it is evident that both youngsters enjoy the environment.

The Zolla Boys, the name stems from time spent at St. Anthony School, at nearby Winstead. While there, Ben, Sam and brother Tommy, now 12, were commonly known as ‘the Zolla Boys.’ The name stuck, according to the local news outlet, The Register Citizen.

Ben says, “[Tommy] does not have any interest in playing with us. He actually does not even like bluegrass!”

Another adult who plays with the Zolla Boys is banjo ace Richard Underwood.

Larry Zolla relates how Underwood came to be involved ……

“I knew Richard Underwood, because his wife, Nancy was a friend I had met through other people in the music from our area. My old band opened for the Johnson Mountain Boys back in 1984, when they played some Connecticut shows. I have always stayed friends with them and we saw more of each other when they (Richard and Nancy) moved back to Massachusetts, after living in Maryland for 25 years.”

“The boys have been fortunate to have as influences, some of the friends I have made in music the past 20 years. Eric and Leigh Gibson, who I met over 17 years ago, have been huge inspirations and role models. (As well as being just wonderful people in general).

Wayne Taylor ([formerly a member of the] US Navy Band), and Frank Solivan I would include with them.  Can’t say enough good things about them.”

Another who has provided some invaluable bits of information is Rounder Records’ A&R man Ken Irwin. He make this assessment of the Zolla Boys’ progress ……

“…..  they are taking their time and learning as much as they can about the brother duets and learning new songs, all while keeping up with their schooling. They have a passion for the music and for brother duets in particular, but they are also finding material elsewhere and adapting it their music.

They seem to be going about their music in an appropriate and professional manner, working at a pace that is comfortable to them. I think that they understand that there is only one chance to make a first impression and continue to work on their music until they feel comfortable with taking it to the next level.

I think it’s great that they are not jumping in with both feet the way too many other acts do and have done.

I very much look forward to their continuing development. If they continue to grow as they have over the years I have known them, we’ll all be in for quite a treat.”

A sign of the Zolla Boys’ current status can be found in their impending first visit to Kentucky this coming week.

Anchored by an appearance on WoodSongs Old-Time Radio Hour, Lexington, (on October 26th) the Zolla Boys will, over four days, play for “30,000 students our age at The Freedom Hall in Louisville” (members of the National FFA Organization, October 26th – 30th); “We are hoping to bring some new young fans to bluegrass music,” Ben adds.

The mini-tour will conclude with a show in Clay City with the Kentucky Friends of Bluegrass (October 3st).

I am sure that all who witness these appearances will find the Zolla Boys are a joy to watch, and to listen to, and will be looking forward to hearing their recordings, but only when the Zolla Boys are comfortable, secure in the knowledge that they have polished the required skills.