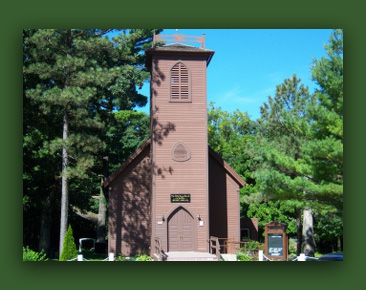 Church in the Wildwood isn’t a recently written song.

It was actually composed in 1857 by a young music teacher named William S Pitts as a result of a June visit to Bradford, Iowa. Pitts was on a stagecoach ride that stopped at the town.

During a trip to visit his fiancée in Fredericksburg, Iowa, the stagecoach stopped at Bradford, allowing Pitts to wander through the woodlands there. He happened upon a particularly beautiful spot in a valley close to the Cedar River and an image formed in his mind of a church building at the location.

Returning to his home in Wisconsin and unable to forget about the image, Pitts wrote a poem that he later set to music, saying at its completion, “only then was I at peace with myself”.

When Pitts returned to the area with his wife in 1862 he discovered a church being erected where he had imagined it to be. The church members had been meeting in a variety of temporary rooms until Rev. J.K. Nutting led the drive to create a permanent home for the congregation. Providentially, the very plot where Pitt imagined a church would stand was donated by the family that owned it and soon a church building was erected on the exact spot.

Not only that, the church was being painted brown, the colour mentioned in the song. At the time, Ohio Mineral Paint’s brown paint was the cheapest paint to be found.

During the winter of 1863-1864 Pitts taught a singing class at Bradford Academy. He resurrected the song and tutored his class to sing the song at the dedication of the new church in 1864. This was the first time the song was sung by anyone other than Pitts himself.

In 1865 Pitts moved to Chicago, Illinois, to enrol at Rush Medical College. To pay for his enrolment fees, he sold the rights to the song to a music publisher for $25. He completed medical school, graduating in 1868, but the song was forgotten once again.

After the church closed in 1888 due to an economic downturn in the town, the Society for the Preservation of The Little Brown Church was founded.

In the 1890s evangelists Arthur Chapman and Charles Alexander helped to popularize the song.

By 1914, services were again held in the church. Shortly afterward, the small congregation experienced a revival that attracted new attention to it and to the song, Church in the Wildwood.

Among those who found and loved the song at this time was the Weatherwax Brothers Quartet.

This group of traveling singers journeyed throughout Canada and the USA in the 1920s and 1930s and used The Church in the Wildwood as their trademark song.

As the song grew in popularity, the church has become a popular tourist spot, and remains so today. It attracts thousands of visitors every year to see or be married in the little brown church in the vale.

The Church in the Wildwood was recorded by the Carter Family for RCA Victor Records on October 13, 1932.

In 1994 it was recorded by Bill Clifton and Jimmy Gaudreau for Clifton’s Elf Records. Clifton reflects ……

“Personally, I fell in love with the Carter Family recording of the song when I was a pre-teen…and always enjoyed hearing many other families and groups sing the song over the years. When Red Rector and I recorded a County LP in Roanoke, Virginia, we were joined by several members of The Shenandoah Valley Boys and Church in the Valley was on our to-do list…but it failed to come together quickly enough, and we abandoned it. Some years ago I was in Iowa to perform and to receive an award, and it was at this time that I first got to go to the village, meet the preacher of this little Congregational church and actually sing the song to a couple of dozen members of the congregation and maybe a tourist or two. It sits close to a country road (now hard-surfaced due to a recent governor’s wife complaints about the dust when she visited it) and it continues to be painted brown. It was originally painted brown because brown was the cheapest paint…but I have no idea whether this is still the case.

The church keeps various souvenirs available for purchase…including a brochure about William Pitts, copies of the original sheet music, picture postcards, a booklet that tells the story behind the song etc.”

Church in the Wildwood

How sweet on a clear, Sabbath morning,
To list to the clear ringing bell;
Its tones so sweetly are calling,
Oh, come to the church in the vale.

There, close by the church in the valley,
Lies one that I loved so well;
She sleeps, sweetly sleeps, ’neath the willow,
Disturb not her rest in the vale.

There, close by the side of that loved one,
To trees where the wild flowers bloom,
When the farewell hymn shall be chanted
I shall rest by her side in the tomb.

From the church in the valley by the wildwood,
When day fades away into night,
I would fain from this spot of my childhood
Wing my way to the mansions of light.