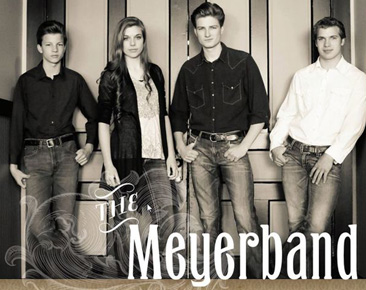 Stop me if you’ve heard this one before… A talented group of siblings dedicate their youth to bluegrass music and attract attention for their skill and depth of understanding while still in their teens.

Meyerband, previously know as Meyer Bluegrass Band, has released a debut EP project. Before you say, ‘here we go again,’ there are several things about this bunch that set them apart.

As we’ve mentioned before, the family band is a commonplace in the bluegrass world, and while not wholly unique to our genre, it occurs with enough regularity to have become a recognized stereotype. In this case, though, John, Mary, David and Jimmy Meyer defy the norm by having come to the music themselves. Their parents didn’t form a little band as a family activity, or push them out on stage.

But their folks aren’t completely off the hook. John, the oldest at 21, tells us that the whole thing got started when his mom picked him up a yard sale banjo for $50. He caught the bug, taking lessons in southwestern Missouri from Larry Smith. Before long, his younger sister and brother started lessons soon as well, and, voila… they had a family band.

John’s still on banjo, David (19) is on guitar, Mary (17) is on mandolin, and Jimmy (15) handles the bass. The three older sibs take care of lead vocals and all have lovely voices that blend as only family harmony can. They have developed a solid grounding in contemporary and traditional bluegrass on the contest circuit, having won the SPBGMA band contest in 2013, and the Silver dollar City competition in 2009, only a year after taking the stage together for the first time.

These kids can pick and sing, and the family has moved from Missouri to Nashville to offer them greater opportunities in the music business. Their abilities are such that they could attract mega-producer/engineer Bil Vorndick to work with them on this project. It’s a professional job, as you might expect.

These five songs on Meyerband offer a taste of what these four fast developing grassers can do, with more than a hint of much bigger things on the horizon. Already, John and David are solid, professional level players, either of which could step in to a touring road band right now. Mary and Jimmy are both better than capable pickers, and will surely quickly reach their older brothers’ level in no time.

Opening up we hear a hard-driving version of The Beatles’ Can’t Buy Me Love sung by David, followed by a mellow version of That’s Just Me, from Billy Currington’s self-titled 2003 album. Mary gets her chance to shine on I Wanna Live Like That, a Larry Wayne Clark and Cathy-Anne McClintock composition that Vorndick suggested.

Stay With Me is a duet by John and Mary, a number they wrote together. It’s a standout, showing how well the Meyers handle acoustic country as well as bluegrass, and the CD closes with John Saw, a popular Southern Gospel song, which is performed in a straight ahead grass style.

Like any young outfit, Meyerband is in its earliest stages. This CD is strong, but not as strong as their live show. More than anything, what these kids have is promise and potential, and they have it by the bushel.

The CD is available from the band web site, where you can hear audio samples from the various tracks. Let’s hope they continue playing together, develop those songwriting chops, and keep making bluegrass for many years to come.