When standing beneath the monumental Natural Chimneys (120 foot limestone pillars and the only remaining evidence that this part of the world was once completely undersea) in Mount Solon, Virginia, it’s hard to imagine a more beautiful location for a music festival. That’s just one of many things that keeps people coming back to the Red Wing Roots Festival, an event put on by Harrisonburg Americana group The Steel Wheels for its third year in a row. Since its inception, Red Wing Roots has been an opportunity for festival goers to see a diverse array of talented musicians from across the country, reflecting musical traditions from even farther.

Having attended, myself, each year, I would have to say that Red Wing 3 followed its initial format quite closely, and intentionally. Mandolin player and Steel Wheels member Jay Lapp commented “ Well, I wouldn’t say there have been too many major changes (this year) …..the quality of the lineup has stayed the same, if not, gotten better.” There was hardly ever a gap in the music, thanks to a brilliant stage setup that varied all the main acts between two separate stages that faced each other. When one act finished, the other stage would start up playing almost immediately.

Friday kicked off the event with a lineup including the harmonious Mandolin Orange, as well as the unique blend of Americana and Celtic music of Elephant Revival. The late night for Friday might have been the most exhilarating though, with the The Travelin’ McCourys. Ronnie and Rob, sons of bluegrass legend Del McCoury, team up with monster fiddle player Jason Carter and bass player Alan Bartram, and to the delight of audience members, Andy Falco of The Infamous Stringdusters. Every musician on that stage in their own right left the audience amazed at sheer musical talent in songwriting and in incredible picking.

This left audiences buzzed and ready to go for headliner and Texas country star Robert Earl Keen. Besides being an expert songwriter, and fantastic lyricist, Keen carried a certain presence that made it hard to break away from his every word. He was confident, bold, and had the audience in a stir by the end of his set. Red Wing concluded its fantastic opening night with a late late night set from The Brothers Comatose.

The Judy Chops, opened day two with a set of mountain swing, followed by fantastic bluesy and groovy bass playing from seven time IBMA award winning Bassist of the Year Missy Raines & The New Hip, as well as some simply masterful guitar playing from Stephane Wrembel. What came next I can only describe as a jaw dropping display of all female harmony from Sarah-Sarah-Aoife, a remarkable collaboration between Sara Watkins of Nickel Creek fame, accomplished solo artist Sarah Jarosz, and Crooked Still singer Aiofe O’Donovan. The trio delivered a performance that carried the audience from uproar of adoration to complete silence for focused listening and back again. Their closing song, a stomp-clap solely-sung exquisite tune left the entire audience with goosebumps and open mouths as they surrendered the crowd to their hosts The Steel Wheels.

Whether it was the four part harmony, or Trent Wagler’s solo singing, The Steel Wheels have some of the most distinct and tight vocals on the Americana scene. They are also all brilliant players, and have immense talent when it comes to their songwriting. Song after song, The Steel Wheels delivered beautiful sounds that were hard not to dance to. Though they were not without their emotional moments. There were plenty of tears in the audience as they played the bittersweet song that the festival takes its name from: Red Wing. The finale had to be one of the highlights of the night, as Trent brought out the band’s signature Gospelator, a stick with bottle caps and washers to jingle, with a rubber stopper on the bottom to lay a beat. As they lay their instruments down, the band took to a single microphone, and sang their hearts out to one of their most distinct and soulful Gospel tracks, No Rain in the Valley to close their set.

Only The Punch Brothers could have followed that set, and follow they did with their incredible musicianship and vocal stylings. Chris Thile, band leader and mandolin player extraordinaire, was particularly physical that night, playing like a man possessed. Their music is just as infectious as his smile as he danced along to his playing. Frank Solivan and Dirty Kitchen provided the late late night entertainment for those revelers still riding the wave from those earlier performances.

Sunday morning opened with “a fun tradition to start.” Says Lapp, “We wanted to put something on with a nice quasi-Gospel feeling. Sometimes we have some special guests up on that and sometimes we do our own thing,” Nothing like coffee and the Steel Wheels beautiful vocal harmonies.

The final headliners for the fest were The Wood Brothers, who played a jaw dropping blend of Americana music with elements of blues, and even some jazz stylings. The band’s sound was defined by harmonies, explosively aggressive bass playing, and wonderfully odd drumming. At one point the drummer pulled out an instrument that appeared to be a drum set adapted into a guitar! For a solid five minutes Chris Wood abandoned his position on bass to rile up the crowd with a high energy dance. They also played crowd-pleasing covers, most notably Ophelia, by The Band.

Though just when people were starting to come to terms with having to go home, audiences were treated with the sound of a final goodbye from The Steel Wheels who invited everyone to try to sing along with the chorus of the eponymous Red Wing.

With that, Red Wing Roots ended, and multitudes of first time attendees and festival veterans alike were left to walk back to their campsites and cars. With the natural chimneys, and all their beautiful history behind them, they were left with memories of the weekend of beautiful performances just as strong and solid as the chimneys themselves, and dreams of future Red Wings to come. 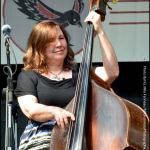