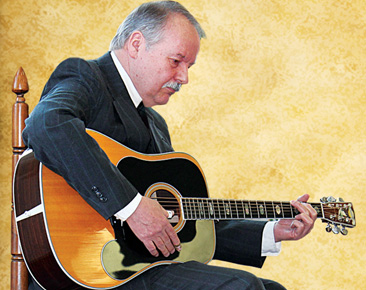 He spent all of his formative years in Silver Spring, Maryland, graduating from high school and working in a bank there, in Ashton Maryland, and in Burtonsville, Maryland.

As he was growing up music didn’t play a part in those early years of his life. Sure, he listened to the popular music of the day – Rock’n’Roll – on the radio. He even shunned a parental offer to go with them to a bluegrass music festival. His primary interest during those early years was the American Civil War, the War between the States, visiting battlefield sites nearby, and doing research in some depth.

“In the summer of 1973, I had a chance to take an extended camping trip with some family friends. Our ultimate destination was Silver Dollar City in Missouri.  On the way out, we stopped in Nashville to go to the Grand Ole Opry, which was still in the old Ryman Auditorium. I was 17 at the time. When I got back to high school that fall, my political science teacher, Bill Cutlip, asked what I did over the summer. Among other things, I told him about visiting the Opry. He asked, “Oh, you like country music?” “Well, it’s ok.”” As it turned out, he had been to a police auction in downtown Washington, DC and among his winnings were stacks and stacks of mostly then current country music albums. “He offered to let me have any I wanted for 33 cents apiece. Most of the albums didn’t do much for me but mixed in the piles were two albums by Bill Monroe, two by Flatt & Scruggs, and one by the Stanley Brothers. I wasn’t really familiar with bluegrass at the time but there was something exciting about the sound I heard on those albums. I enjoyed all of them but it didn’t take me long to gravitate towards the music of the Stanley Brothers.”

While working in the school bank he would listen to some of his acquisitions on a school record player. He remembers playing LPs by Flatt & Scruggs, The Fabulous Sound he thinks it was. “I also took some more recent releases, such as the Nitty Gritty Dirt Band’s Will the Circle Be Unbroken and the Bill Monroe Bean Blossom 2-LP set.”

After he turned 18, he was trained to be a bank teller and worked the evening drive-in shift at the Burtonsville, Maryland, branch of the Sandy Spring National Bank and Savings Institution. “A benefit of working at this branch was that it was situated close enough to Baltimore (25 miles away) that I could — on a good day — pick up radio station WBMD and the 4:00 to 4:30 airing of Ray Davis. The AM signal had a lot of static, but I still remember the excitement of being able to make out the Stanley Brothers performing Going to Georgia.”

Growing up in the Washington, DC, metro area, Reid was exposed to various forms of bluegrass music. The area was home to groups such as the Country Gentlemen and Seldom Scene as well as radio station WAMU. “In those early days of discovering bluegrass, I went through various phases of trying on the music of different bands, such as the Country Gentlemen, Jimmy Martin, Flatt & Scruggs, Bill Monroe, etc. After a year or two, I settled on the music of the Stanley Brothers/Ralph Stanley and this has remained a constant ever since. I would count them and Monroe as the two groups that have influenced me most.”

Once he had discovered bluegrass music, he became obsessed with purchasing albums. “My main outlet was a place in Langley Park, Maryland, about a 25-minute drive my home in Colesville, Maryland, called The Music Box. The owner, Jerry Brown, had a lot of discontinued LPs from King and Starday, and this is where I got a lot of my early purchases of material by the Stanley Brothers, Reno & Smiley, the Lewis Family, and the like. It was also during this time that I started receiving Bluegrass Unlimited magazine and the County Sales newsletter. All of these things were instrumental in shaping my bluegrass tastes.”

Another person who frequented The Music Box was current Seldom Scene guitarist, and a primary vocalist, Dudley Connell. They struck up a conversation while both were attending Ralph Stanley’s festival — about ten hours away — in the extreme corner of southwestern Virginia. It didn’t take long to discover that we both shared a passion for the music of the Stanley Brothers.

“I mentioned to Dudley that I had collected a number of the 45 rpm singles of the Stanley Brothers that were issued on the Mercury label in the 1950s. None of this material was commercially available at the time. I offered for Dudley to visit me with his reel-to-reel tape recorder to make copies. It wasn’t long after the Stanley festival that he showed up and we spent an afternoon making tape copies of the 45s. I think this was June of 1976.”

“We continued to keep in touch. His band, the Johnson Mountain Boys, was just taking shape and I went to see them a few times. That early incarnation consisted of Dudley on banjo and tenor vocals, Ron Welch on guitar and lead vocals, and the newly-recruited Ed D’Zmura on mandolin.”

“Also at that time, I was heavily involved in seeking out various former players in the Stanley Brothers’ band to talk with them about the recordings they helped to make with Carter and Ralph. Dudley went with me on a number of those interviews. The first was in May of 1977 when we ventured to Detroit, Michigan, to talk with Bill Napier. On the way, we stopped in to visit with the former head of the Stanley Brothers/Ralph Stanley Fan Club, Fay McGinnis; she lived in the Detroit suburb of Wyandotte. Next was an October 1977 trip to Valdese, North Carolina, to spend the day with George Shuffler.

It was also during this time that I developed an interest in performing. I had never been musical prior to this, so it was a starting from the ground up proposition. Dudley and I went to The House of Musical Traditions in Takoma Park, Maryland, where I purchased an upright Kay bass for $275. Dudley taught me the rudiments of bluegrass bass playing — he had his work cut out for him! I remember one of our early practice sessions… we worked on Handsome Molly, a two-chord song in the key of G. All I had to do was rock back and forth on three strings. I think it was June of 1977 when I made my debut performance with the Johnson Mountain Boys when we played at a country club in Gaithersburg, Maryland.

I stayed with the band for about a year or so. We played places like Shakeys Pizza in Rockville, Maryland; outdoor events on East Capitol Street in downtown Washington, DC, and in Leesburg, Virginia; some place in College Park, Maryland (near the University of Maryland campus), called O’Brien’s; The Silver Fox and Wally’s Crab Boat in Gaithersburg, Maryland; and the Washington Folk Festival in Glen Echo, Maryland. I never was all that good and I can remember several occasions when Dudley would stomp his foot to the rhythm of the music and say ‘C’mon, Gary, get in time!’ Near the end of my tenure with the band, it was obvious that the group was starting to become more than just a regional group and I wasn’t ready to give up my day job. So, I made my exit in the summer of 1978.

By 1978, after having been involved in researching the recording career of the Stanley Brothers, I wanted to do more than just research the history of recordings… I wanted to make them! So, in October of 1978, Copper Creek Records was formed, and the first release was a 45 rpm single by Johnson Mountain Boys. One song was an original by Dudley called When I Can Forget and the flip side was an instrumental called the Johnson Mountain Hoedown. I think in all, we pressed a total of 800 copies, the majority of which were sold by the band at their performances.

In February of 1983 I moved from the Washington, DC, area to Roanoke, Virginia, to take a job with Rebel Records. Copper Creek Records was not started for just for the purpose of recording the Johnson Mountain Boys, it was the start of what I wanted to be an on-going venture.

I think it was Eddie Stubbs who made the first contact with one of the people who made those live recordings in the 1950s. His name was Bill Offtenbacher from Greenbelt, Maryland. It was through Eddie that I met Bill. At the time, we were all into collecting the music in any form that we could… out of print records, reissues, and tapes of live recordings. In talking with Bill Offenbacher, he made us aware of others who were active in making tapes at concerts. The first two issues of the Stanley Series came from banjo player Lamar Grier. He and Bill Offenbacher were friends in the 1950s and ’60s and would be at the same shows making tapes. Lamar was living in Laurel, Maryland (and still is as far as I know) and I made several trips to his house to preview material from his collection.

Early on, collecting material from Bill Offenbacher was strictly for our own enjoyment and for learning about the foundations of the music. The first live album we issued was Shadows of the Past (CCLP-0101) — most of which came from Bill Offenbacher’s collection. The remainder of it came from a concert recording that was made in Oberlin, Ohio. The university where the concert was recorded still had a tape of the program. Neil Rosenberg had earlier supplied me with a cassette recording of the show.

It was a year or two after the release of the Shadows of the Past album that I got the idea to release LPs as part of the Stanley Series.

In thinking about it, the first person to ever make any copies of live recordings available to me was a guy by the name of Don Hoos — he operated a drug store in (I think) Evanston, Illinois. This started around 1975 or so. It was maybe a few years later that we became acquainted with Bill Offenbacher.”