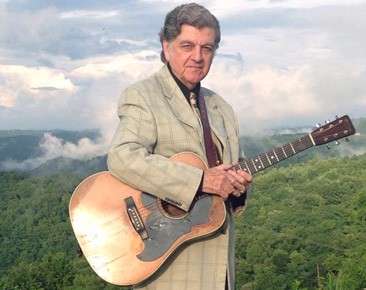 Larry Sparks is noted for his unique soulful, bluesy style of bluegrass that from a distance appears to be effortless. But clearly, there is no doubt that he works hard to keep his audience entertained.

His voice and guitar could not be better matched, bluesy notes pouring/tumbling from both in a complimentary manner.

Like many a farming family, the Saturday night Grand Ole Opry program was a staple in the Sparks household when he was growing up. However, music wasn’t very prominent otherwise; Sparks’ father played guitar a little and his mother sang. It was sister Bernice who, as it were, put a guitar – a Harmony with f-holes and a high action – in Larry’s hands, and it was his own perseverance that took over from there.

Sparks, the last of nine children, started singing with Bernice when he was about five years old. They would sing in church. In those days the service would be broadcast on radio.

The first recording that Sparks and his sister did was Ain’t No Grave Gonna Hold My Body Down. Another old song Building on the Sand. That was in 1954.

His high school years were musically ill-defined as Sparks fluctuated between playing country, rock and bluegrass music. That is until he was 16 years old when his love of bluegrass music prevailed, and he formed a band of his own, the Sandy Mountain Boys. They recorded the Stanley’s Brothers’ It’s Never Too Late and an instrumental Sandy Mountain Breakdown. A single featuring these two cuts was released in 1965, on Jalyn 502.

Sparks was invited to join the Stanley Brothers’ Clinch Mountain Boys in 1965, having first played with them in the fall of 1964.

While with Ralph Stanley, Larry Sparks recorded the original versions of modern bluegrass standards including I Only Exist, Sharecropper’s Son and Going Up Home To Live in Green Pastures.

Sparks struck out on his own, forming the Lonesome Ramblers, in 1969. His first album in this configuration was the collectable Ramblin’ Guitar (Pine Tree P TSLP 500), but it wasn’t until his second album – New Gospel Songs (Pine Tree P TSLP 507) – that Sparks found his own feet, creating the unique style that we all love so much today.

Since then, 1971, Sparks has gone on to enjoy the pretty universal popularity that surrounds him as he celebrates his 50th anniversary in the bluegrass music business.

That popularity is reflected in his induction into the Bill Monroe Bluegrass Hall of Fame; The George D. Hays Hall of Fame; the SPBGMA’s Hall of Greats (in 1990) and he has been voted the IBMA’s Male Vocalist of the Year twice (in 2004 and 2005). Larry has also been nominated for a GMA Dove award for his Gospel album, New Highway.

He has worked across the United States, visited Canada and toured in Japan.

Larry Sparks has released over 60 albums, most notable is 40, celebrating his 40th year, (Rebel 1806), the winner of IBMA’s Album of the Year and Recorded Event of the Year in 2005.

His latest release is Lonesome and Then Some, A Classic 50th Celebration (Rebel 1846), which features some elite guests.

Larry shared some thoughts with us this week about his 50 plus years in bluegrass.

I am reminded that you worked with the Stanley Brothers as an 18 year old; what do you remember of your first professional job?

“Think I was 17 years old when asked to fill in with the Stanley Brothers. Carter liked my guitar playing and so they used me on show dates for maybe the next year and a half. Carter’s health was failing by then and things slowed down using me. He passed away in December 1966. I do remember the Stanley Brothers were very popular, also on radio and jukeboxes. In 1967 Ralph hired me as his lead singer and guitar player for the next three years. Recorded several albums with him. It was a time in my career that I treasure very much working with the famous Stanley Brothers, and then Ralph.”

What influence did Ralph and Carter Stanley have on you?

“Looking back I think the Stanley Brothers, Carter and Ralph, did have some influence on me. Their singing was a very natural, heart felt style and their music and band were always great. Simple and real. Everything was in the right place. They could really sing and they matched together so well. Much feeling in their singing. It was very natural for me to step in and do what I did with them because my thoughts and heart must have been a lot like theirs when it came to singing and playing. And again, some things are just meant to be.”

You formed the Lonesome Ramblers in 1969; who made up that first band?

Tell me about some of the band members that you worked with.

“I’ve had many band members work for me over the years. When I first gained national attention with my band it was in 1972. I recorded an album for Starday/King Records in Nashville called Ramblin’ Bluegrass. Wendy Miller – mandolin and harmony; Mike Lily – banjo and harmony; Art Wydner – bass (deceased). I’ve had many good musicians in my band and I have maintained my sound with all of them.”

You have recorded many excellent songs; which of them do you have a particular liking for and why?

“With all the music I’ve recorded there is always certain songs that will catch on in certain areas and to certain people more than others. Each song I have ever recorded means something to me and has touched me in some way. Maybe a love song, maybe a Gospel song, a true to life story song, or a hard-driving bluegrass song, or whatever. They all have their place with me. So I really don’t have a particular song. I would buy ’em all.”

Your guitar-playing style has been mentioned as a sort of advancement on what Maybelle Carter used to play; how would you describe it and who were your main influences?

“Well very good question you have here. Growing up I heard very little music unless I caught it on radio, and that I tried to do often as I could. I was raised with no record player or TV and maybe that has been of help to me, I think. I’ve never paid to see a music show and never bought a record. Yes, I heard Maybelle Carter play, and she was just great I thought. Also Don Reno, Earl Scruggs, Bill Napier, George Shuffler. Then I heard blues guitar players on radio from time to time, but not a lot. So all these great guitar players were all there with different styles. I knew I should not try playing like these great players. So I decided to play like I sing. The melody to my songs. So I did and I just play off the top of my head – not as many slick notes, but play the melody with feeling – and then you have a Larry Sparks style guitar playing. You must think from your own self to create a style.”

Tell me about your guitar; how long have you had it? What strings do you use?

When in my teens I started using Mapes guitar strings made by the Mapes Piano String Co. in Elizabethton, Tennessee. I still use Mapes today. Mapes did come up with a special string for me. It’s the Larry Sparks International Gold Mapes guitar strings. I use the heavy gauge strings. I’ve found these strings have less breakage and hold tone very good. Of course I have them in heavy- med- light gauges. My guitar is natural toned to my voice.”

When did you fit the pick guard? And why does it cover such a big area?

“When I found my guitar in 1967 the pick guard had been put on by Hap Hammond. He also designed Jimmie Skinner’s pick guard. I really liked it because it set me apart from a regular guitar look. It is very thin and does not hurt the tone or the volume of the guitar. I thought it could become a trade mark for me and it did. If the pick guard would have been smaller it would not have matched the size of the guitar with the way it was designed. I’ve been playing the same guitar for 48 years now.”

What are the most memorable moments in your 50 years in bluegrass?

“I have too many to mention, but I will give you some moments in highlights.

1. (1952). My sister Bernice learning me guitar chords and singing on the side of an old iron bed.

5. (1970s) built my sound and style with new fresh songs, accepted by many fans, recording for several recording companies, playing on Grand Ole Opry, also singing with Bill Monroe on the Grand Ole Opry, touring full time all over the country with my band.

6. (1980s) another good decade for me, a lot of my songs was starting to become signature songs. (1988) celebrating 25 years in bluegrass and Gospel singing.

8. (2013) celebrating 50 years in bluegrass music, recording CD, Lonesome and Then Some, a classic 50 year celebration, with many special great guest for Rebel Records.

Going back to 1963, I recorded my first single record for Jalyn Records.

The greatest and most important moment of my life is when I became saved and accepted Jesus Christ in my life; became saved and became a Christian. What a difference it makes. I am content, I have peace and joy in my life. I know that a lot of people don’t want to hear the name of Jesus or a mention of God. But obeying God’s commandments is the way to go for me.”

Here are a number of Larry Sparks clips from the IBMA’s FanFest 2012 …..