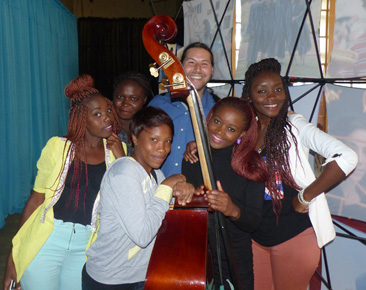 Henhouse Prowlers have returned to Africa on another cultural exchange mission for the US government. This report of their time in Zambia comes from guitarist Star Moss.

For those just tuning in: the Henhouse Prowlers are on our second American Music Abroad (AMA) trip to Africa. We’ve just come from Uganda and Rwanda, and Zambia is the third country we’ll visit.

We arrived at the Lusaka airport about midday. All of our bags were in a neat little pile at baggage claim… except our banjo player Ben’s. We were prepared to lend him our socks and underwear for the remainder of the trip. More on that later.

We were greeted by Austin Ngoma, the young U.S embassy aid that would travel with us the next six days. We immediately liked him. He’d previously worked with refugees from all over Africa. Ironically, once the refugees were repatriated, he was out of work, which is how he came to work at the Embassy. He had a booming voice, and we told him if his career in the embassy didn’t work out.. he should go into radio.

Our first morning in Lusaka, we hit three radio stations in less than two hours. QFM.. Power FM.. and of course Hot FM. All small radio stations with just a few employees each.. but very excited to have an
American bluegrass band there playing a style rarely heard in Zambia. The radio DJ’s all spoke with British accents, as Zambia used to be a British colony.

That evening, we performed at Evelyn Hone College, a small university in the center of Lusaka.

The auditorium was packed full of mostly music students. We played in front of microphones, something
we typically don’t do at workshops, which made it feel more intimate. We were all shocked when one man in the crowd requested “Sittin’ on top of the World.” He had heard Doc Watson’s version at some point. We sang it, and then we closed with our rendition of P. Square’s Nigerian hit “Chop my Money,” which everybody sang along to.Afterwards, a few students came up on stage and performed.  One of them invited Ben, Dan, and Jon on stage (he had the guitar covered) to back him up on a traditional Zambian number whose name escapes me now.The crowd loved watching a bluegrass band trying to learn a Zambian tune on the fly! Luckily the chords weren’t that difficult…Day 2Good news today: Ben’s missing bag arrived! We were starting to doubt whether he’d ever see it again…

We left early for Kitwe, a small town about four hours from Lusaka. It’s in the copper mining region known as the “Copper Belt.” The drive was beautiful and at times bore an uncanny resemblance to
Nebraska or Oklahoma. It’s flat and grassy savannah.

As we rolled into the outskirts of Kitwe, we saw a black, ominous mound of “slag” (by-product of the copper mines). It stood around seven stories tall and a few hundred feet long. It is loose stuff, like sand, and the mound appeared unstable, as if it could shift and collapse at any moment. We marveled at how dangerous it would be if someone climbed on it, and the whole thing collapsed.​

That evening we had a small concert in Kitwe in an intimate little theater. There were a few enthusiastic young guys in the audience who bordered on heckling at times, but it was all in good fun and it was nice to perform for such a small audience. Afterwards we did a short radio interview with the local station.

One concert-goer insisted we stay for a beer afterwards in the adjacent bar, which was full of locals that worked in the copper mining industry.  One round turned into a few rounds.  At one point, we casually lamented to our new friend that we wouldn’t be able to see Victoria Falls given our schedule. Without hesitation, he replied that he’d drive us there this very night (an eight hour drive).

People’s hospitality here never cease to amaze us.. we thanked him but slipped away for some much needed rest.

Back at the hotel restaurant that night, Dan was brave enough to try one of the local delicacies, “game meat.” It turned out to be warthog…he reported that it was gamey indeed.

A rest day.  On our way back to Lusaka, we stopped for supplies at a huge shopping mall that rivaled any back in the states. It had a massive supermarket with everything you could find back home. It was unexpected to be surrounded by canned goods, portable TV dinners, and cases of beer.  On the whole, Zambia seems to be further along the development spectrum than a lot of places we’ve been to. It has functioning roads, a thriving copper industry, and supermarkets and shopping centers just like back home.  I guess having a rare history of almost unbroken peace has made Zambia a relatively easy place to live.

Today began with an early music masterclass with the Zambian Association of Musicians. The audience was all serious musicians, so it made for a great dialogue. It was one of the most satisfying workshops we’ve done to date, and the crowd was curious and engaged.

At the end, a young man picked up Ben’s banjo. He wore a red checkered flannel, and holding Ben’s banjo, he almost looked like any picker you’d find back in the states. He said he’d never played one before. What happened next was one of the most amazing things any of us had ever seen. He literally figured out the banjo on the spot.. and in a manner of seconds…was tearing it up! How he figured out the fretboard in a matter of seconds was beyond comprehension. Check out the video below:

That night, we played a small outdoor concert the Ambassador’s residence, Eric Schulz. Amazingly, in the front row at the concert were a few older women, dressed in very traditional, colorful garb, that were the original leaders of the colonial independence movement way back in the sixties. Pretty incredible. Also in attendance was the outspoken Scottish ex-vice president of Zambia, a guy we all heard rumblings about. Word was that he was a bluegrass enthusiast who played banjo and sang. We were hoping he would join us onstage…but unfortunately he slipped into the shadows before we had a chance to talk to him.

A bittersweet final final day in Zambia. We are excited to see Cameroon, but sad to leave a country we’ve grown to love.

We stopped at a local clothing shop run by a local woman who designed high-quality shirts and dresses. Very colorful. Dan and Ben found some great shirts just in time for the concert tonight (unfortunately, she didn’t seem to have Jon or my size!)

Tonight was a final evening concert at the Lusaka Playhouse – a big old theater. It was to be a collection of Zambian musicians – including a few groups from the Zambian Association of Musicians we had worked with the previous day  – and a few short sets by us.

There was some amazing acts.  Some highlights: a barbershop-like quartet who did The Lion Sleeps Tonight, a young woman on solo fingerstyle guitar, and a troupe of dancers that dragged Jon and Dan onstage with them. On our opening song, we were joined by Pontiano, a local legend who revived an old Zambian hit that became widely known. In his words, the song is about a woman’s large-backside. It’s a simple tune with a very catchy melody that everyone knows.

Afterwards, I was able to trade a few licks with the young guitar player. She was barely twenty, but she was one of the best musicians we’ve run across here… she played a beautiful rendition of Fur Elise.

The night was a great final farewell… we’ll miss this place a lot. Off to Cameroon tomorrow.