This report (and photos) from George Shuffler’s funeral service yesterday comes from Becky Johnson, host of The Bluegrass Breakdown Show. It airs Wednesdays from 2:00-4:00 p.m. (ET) at wcomfm.org.

The sun was bright and the skies a dark Carolina blue as I made my way out of the Piedmont of North Carolina along I-40 west, up the mountains to Valdese, an isolated but beautiful part of the state. Settled long ago by Waldeseans….a faithful early Protestant sect that vowed poverty, helping out their neighbors and devotion to family.

The friendliness and outgoing nature of the locals struck me as I wandered through the many thrift stores that stood along Main Street. When I inquired about the local funeral home to an employee ….she knew right away.

“Shuffler, George? Yeah, he’s my cousin,” she answered quietly.”You just head down Main Street a ways……you’ll find it …on the right…..another customer, an elderly lady offered to wait in her car so I could follow her to the place.

I made my way through town and soon found myself amongst a throng of friends and family at the Heritage Funeral Home. So many people were there that was barely enough room to move. Many were familiar faces, such as Mike Ramsey, Dan Hayes, and Ron Thomason. Family members were very pleased with the big turnout.

I made my way to say goodbye to George… I whispered to him our love and farewell. Then the casket was closed and the service began. The coffin took center stage; a huge spray of fresh red roses blanketed his shiny dark chestnut casket. To his left stood one cross shaped flower arrangement and just beyond, near the piano player, was George Shuffler’s guitar proudly on display; bittersweet to see it all alone up there.

James Alan Shelton played an instrumental version of Will You Miss Me When I’m Gone? He played other tunes later on in the service.

The sweet music of Darrin and Brooke Aldridge filled the air. Ron Thomason officiated the service. He was very heartfelt, full of stories as only Ron knows how to spin…..stories that had us all roaring with laughter, and then memories that had us wiping away tears. More music played, and it was over.

The pall bearers stood up after the final prayer, silently rolled George Shuffler down the aisle to the waiting hearse.

A very long line of cars perhaps a hundred or more slowly snaked their way back down Main Street, to the graveyard.

The sun was setting low in the blue cloudless skies as we all parked and walked up the ridge making shadows harsh… cold, like the Spector of the Grim Reaper. We all gathered round.

A few words were spoken by the pastor, the most solemn moment of all was suddenly interrupted by 2 large, overly friendly dogs – one all brown, one mix of white and brown – in a joyful display of playfulness and joy. As they weaved through the legs of everyone present, they began rolling and tumbling all over each other, completely oblivious to the humans in mourning. However, I firmly believe that those 2 dogs were, in fact, the spirits of George Shuffler and Carter Stanley who came to visit all of us, and wanted us to be happy. To celebrate our own lives fully in each moment we are given, to run romp and play, to laugh fully and love deeply; to have faith that one day we shall be together again….only George Shuffler would make his own passing feel so full of………..life!

Rest in Peace, my friend. You made the world a better place for all of us. 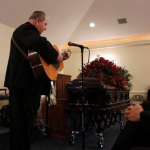