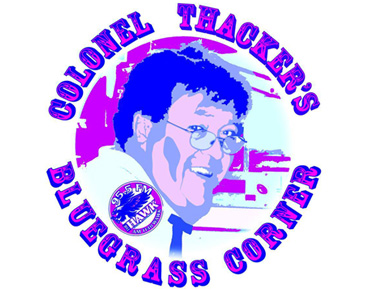 It’s a common story in bluegrass music: mountain boy moves north, but tries to keep his roots close. Most of the time in songs, there’s a powerful lonesome ending to the story, but southeastern Kentucky native Colonel Terry Thacker has a brighter outlook. He has channeled his love of the mountains into a long-running bluegrass radio show in his new hometown of Kendallville, Indiana.

Born and raised near the small town of Hindman, Kentucky, just a few counties over from the Osborne Brothers’ homeplace, Thacker grew up with a strong musical heritage. “The great fiddle player Art Stamper is my third cousin on my dad’s side of the family,” he says. “I’m trying to carry on the tradition as a fiddler.” After six years in the Army (including time spent in El Paso and Germany), Thacker, along with his family, settled in northern Indiana. Soon, he felt the need to share a little bit of the mountains to his new neighbors. He was inspired by a good friend from Whitesburg, KY who had weekly radio programs on Friday and Sunday nights.

“Most of our area is made up of folks from Kentucky, Virginia, and West Virginia, so I thought northeast Indiana needed a bluegrass program,” Thacker says. “I had a big record collection and lots of stories where I had met and talked to many bluegrass greats. I pitched the idea to our local station and they gave me a chance, and I’ve been on air since.”

In August, Thacker celebrated his nineteenth year hosting Colonel Terry’s Bluegrass Corner on WAWK, 95.5 The Hawk. While he began with just a half-hour show, he is now on the air every Sunday morning from 9:00 a.m. to noon. Thacker says that although he is at a small station, he wants to make the biggest impact that he can in bluegrass. In fact, one of the best parts of broadcasting, at least for him, is being able to share the music of the best in bluegrass with others. “I have been so blessed to have met and become friends with many of the greats and have had them on my show as guests,” he says.

We recently had the chance to ask Thacker a few questions about his thoughts on bluegrass music. Here’s what he had to say.

“It’s an American original and like no other music. It has passed down from generation to generation ever since it first came to prominence in 1945 with Bill Monroe, the Father of Bluegrass Music. It isn’t bound by the instruments but through the creativity of its musicians. It has crossed into other genres and gotten songs, and has influenced other artists outside of bluegrass. It’s a living, breathing music.”

What artists do you consider examples of the forms you most enjoy?

“Peter Rowan, The First Whippoorwill. It’s just a down right good album. The best tribute to Bill Monroe by any group or a group of musicians. Most were former Blue Grass Boys at one time. I just love it.”

“The Mountain, Steve Earle with the Del McCoury Band.”

Artists who are interested in submitting their music to Thacker for airplay consideration can send physical copies to him at: