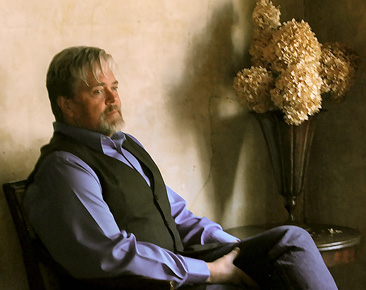 This month’s edition of Artist2Artist finds Lisa in discussion with vocalist John Cowan of Newgrass Revival fame, who supplements his solo career touring with The Doobie Brothers. Her complete interview can be heard in the podcast below.

If you are the type who regularly taps into your inner sheep and just follows along – or allows the winds of others’ desires to buffet your music direction from side to side – you will be eventually be obliterated by minor, if not nut-case, music industry challenges.

As the decades roll along, every musician makes internal and external choices that build either a positive or negative foundation for their artistry. This foundation is what makes for soul-honoring decisions when faced with the dissenting expectations of others, whether they be self-serving promoters, less than reputable record labels, the highly opinionated “chair snappers” at a festival, and the like.

Along with that foundation is having awareness of, and trusting in, your inner compass. That direction is what gives reverence to your artistry, as well as honors the musicians with whom you choose to surround yourself. Your compass wants to point you to your True North. And that feeling you get when you are struggling with whether to meet an outer expectation that doesn’t line up with you inner expectation, well that is your compass fighting to align itself.

Birthdays with zeros have a way of urging us to look at our life backwards or our path forward – whether it is 30 or 50, 70 or 90. For some, that backwards view can become the only view based on “what I was, or what I missed, or what I am now because others expected me to do it that way.”

He still seems like a youthful rebel rouser, tossing the chairs and tables in this room we call bluegrass music; one of THE ONES who ignored the “you can’t play it that way” back-lookers

With his band mates in Newgrass Revival, he re-calibrated the music for generations of musicians. These days, the “newgrass” music they created is considered “standards.” Isn’t it funny how the passing years will do that?

Don’t confuse this with a music review

John is celebrating his life with a new album SIXTY to be released in a few months. It is chock full of talented musical friends – some names you will recognize, others you won’t.

Even the cover photo is of the highest art, captured by John’s friend, the world admired uber talented photo-visualist Anthony Scarlati.

John’s album comes out later this year – the reviewers and publicists will write about it at that time.

John Cowan is forward looking. His backward view is that of appreciation.

John isn’t a sheep. Likewise, he is not a wolf determined to decimate others in pursuit of his desires. His approach to music and the music industry is reflective of the approach he takes to living –  it’s about continuing to grow, continuing to live honorably and surrounding himself with supportive, true friends who are as talented, intelligent and spiritually aware as himself.

John Cowan doesn’t adjust his inner compass to the expectations of others.

He embraces challenges that would decimate another band or musician or human. John has a strong internal reference and relishes the times when a tough decision presents itself and he must rely on that compass to align itself to True North. But, and this is an important but, he will re-adjust if he feels that the decision he made turns out to be mistaken. He has a sensitive awareness that isn’t clouded by dysfunctional pride.

“I’m a singer, so I tell other people’s stories… my job and what I do well is somehow translate emotion through my voice.” – John Cowan

When John isn’t on stage or in the studio or in rehearsals, he will steal away to read. He is a voracious reader, sometimes reading the same book several times through. There seems to be a hunger in him to learn about people who have faced unbelievable challenges and overwhelming odds to live – not to survive – but to live.

Some of the people about whom he reads have followed a path based on very, very bad decisions – piling mistake onto mistake.

And then, there are the books about those who have the gift of making solid decisions which cause them to change the world in phenomenally impactful ways – the results of which wouldn’t be evident until generations later – sort of like New Grass Revival.

I interviewed John for my Artist2Artist podcast at Eddies Attic in Decatur, Georgia. John brings up books and authors, documentaries and directors. He talks about death as a destination, he talks about his love of friends, and he talks about his mother who is 99. Please listen to the podcast at the top of this column, it takes about 15 minutes. Pay close attention to some of the authors who John mentions and to the real events about which they write, such as:

Maybe there is an idea John talks about in the podcast that will inspire you to change your window-view or fix your compass to your own True North.

Thanks for reading and listening. I’ll be back at Bluegrass Today on the next full moon interviewing banjo specialist Bill Evans. He gives a much welcome business-take on the economic value of the professional musician.