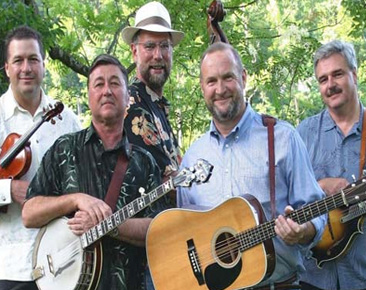 Each month, the LocalGrass Radio Show tries to bring the show’s varied audience of listeners information about a new local band. Sometimes we meet the band in person and arrange for an interview on the show, and sometimes the interview is with someone we’ve never met, and from a place we’ve never been.

One of our earlier shows was with the leader of a band we’d heard of many times, but had never had the pleasure of seeing in person. We just knew these guys were ultra-popular in their home state of North Carolina, and that we were about to find out exactly how they earned this admiration. The man called Uncle Ted White came to be one of our most interesting and entertaining interviews ever, and told us the wonderful story about a great band from Western North Carolina called the White Water Bluegrass Company.

When the interview opened, we introduced him as Mr. Ted White. Ted quickly told us that during his days with Whitewater Bluegrass, Marc Pruett (now banjoist for Balsam Range) always introduced him as “Everybody’s Uncle,” and the name Uncle Ted White just stuck from there on out. Ted continued to tell us that wherever he goes, people he’s never met before come up and call him that, and that’s just who he became.

Uncle Ted had a very warm, funny and charming personality, and I will dare say, was never at a loss for words. As the story about the band began to unfold, he told so many great stories of how the band got its name, and fondly reminisced about some of the adventures of the band since its formation over 30 years ago.

Through the introduction of the interview, we found that Whitewater Bluegrass Company is a versatile group that performs bluegrass, country and folk music, and does so very well. In the vast expanse of the band’s 30 years, they have developed a reputation for being crowd pleasers, and a group that can interact easily with an audience.

Ted alluded to the fact that the Whitewater Bluegrass Company is to the whitewater rafting craze what the Beach Boys are to surf music, and got its name from a regular Saturday gig at the Nanhala Outdoor Center in it’s early days where folks would turn out to ride the rivers.

Before the days at the Outdoor Center, the folks that would eventually make up the band started with roots that could be traced back to the days of Ralph Lewis, John Davis, and Carl Chandler. They would hold open jams in the Western North Carolina area and allow anyone who wanted to play, or learn to play in a group situation, to be a part of the jam. Many musical relationships started in these jams, and some of the future members of Whitewater Bluegrass were familiar attendees.

Through the years, there have been 19 different people pass through the Whitewater Bluegrass Company. Included in the list have been Don Humphrey, song writer; 3 time Grammy Nominee and IBMA award winner, banjo player Steve Sutton; 2 time Georgia State Fiddle Champion Gary Mackey; and Ricochet founder Dave Pendley. Ted noted that most everyone in Balsam Range had passed through as members of Whitewater, and performed on the group’s last CD release which was recorded at BR guitarist Caleb Smith’s studio. Ted and front man Bill Byerly have been the long standing staples of the group, forming the original line up. Along with Uncle Ted and Bill Byerly, Sutton, Mackey and Pendley also remain current members.

When asked about the reputation the band has for generating great audience participation, Uncle Ted noted that he is a 3rd generation square dance caller, and the band does a lot of work on the dance circuit in the area. Ted is able to use this skill to build an instant and lasting relationship with the audience, and along with the rest of the band, it seems every show develops into a great time to be had by all. The band’s popularity has made them a desirable act for many well known festivals and events in the Western North Carolina area, and is a popular favorite for closed events as well. In their 30 year history, Whitewater has performed at 550+ wedding receptions and parties, 750+ family camp dances, 1,000 municipal & street dances, and 2,000 corporate and private parties.

They’ve been the host band for Folk Moot USA, The Smoky Mountain Folk Festival, Kanuga Conference Centers, the historic Horse Barn on the Biltmore Estate, and the beautiful Grove Park Inn in Asheville. Also in their repertoire is the honor of being the ‘staff band’ on the DVD series “Spirit of the Mountains”. Whitewater also performed as the entertainment for the North Carolina Bar Association, and one of our favorite stories from the interview was an occasion when the band was hired to do music for a wedding


Whitewater Bluegrass has two CD releases under its belt, Still Having Fun, and The Celebration Continues, both of which can be purchased at any live appearance, or on the band’s website at www.whitewaterbluegrassco.com.

If you’re in the Western North Carolina area, you owe it to yourself to catch one of the high energy shows from the Whitewater Bluegrass Company. For more information on appearances or booking information, you can contact Ted White at uncletedwhite@yahoo.com, or Bill Byerly at 828-691-8049.