Hosted by the International Bluegrass Music Museum, ROMP Fest 2016 delivered another fine round of bluegrass music for its 13th year. The music and the weather in Owensboro, KY was best described as hot!

Thursday music kicked off with two Hall of Famers on the schedule — Larry Sparks and Del McCoury. Storms delayed the schedule but the shows continued as the weather allowed with Wood and Wire and the Del McCoury Band.

Del and the boys opened with Traveling Teardrop Blues. Ronnie McCoury sang Body and Soul, one often sung by Bill Monroe. ROMP, of course, is located near the birthplace of Bill Monroe. Alan Bartram sang Some Old Day and Rob McCoury handled the lead on the popular Nashville Cats, with Jason Carter’s outstanding fiddle on display. During the request portion of the show, Del did 40 Acres and a Fool before a storm front forced another rain delay.

After a strong rain and a good bit of lightning, those who persevered were rewarded with a fantastic set by the Steep Canyon Rangers.

Friday was packed with bluegrass goodness.

Jerry Douglas and his Earls of Leicester went back to bluegrass roots playing Flatt & Scruggs classics from 1954 to 1965, like Salty Dog, Dim Lights, Thick Smoke and Rolling in my Sweet Baby’s Arms. Douglas said Johnny Warren provided the band’s DNA connection to Flatt and Scruggs band, as his father played with the band. Warren played Black-eyed Susie on the same fiddle and bow used by his father. That’s a legacy, for sure!

The Infamous Stringdusters closed out the main stage on Friday with a rousing set. The crowd moved down front for lots of dancing and the Stringdusters delivered for the crowd. Jeremy Garrett’s amazing fiddle solos on songs like Well, Well were paired with Andy Hall’s vocals and ripping dobro. Garrett’s high lonesome sound was on display with Tragic Life and Fork in the Road. Bassist Travis Book’s smooth voice is featured on Won’t Be Coming Back. All of this is surrounded by Andy Falco’s amazing guitar work and Chris Pandolfi’s banjo picking.

Town Mountain’s afternoon set on the main stage featured several songs from their Leave the Bottle album, including Lawdog. The band was bound for Nashville the next day for their debut on the Grand Ole Opry.

The Bryan Sutton Band’s set included Backwater Blues, about the 1926-27 flood in Nashville, Don’t Look for Me and the Cumberland Reel. Bassist Sam Grisman did double duty with both Bryan Sutton and Lee Ann Womack.

Womack brought a great country show featuring popular songs like Little Rock and I Hope You Dance. She also did a beautiful version of Poor Wayfaring Stranger.

Workshops are popular events and the ROMP workshops did not disappoint. Fans got up close and personal to hear from instrumentalists and songwriters, such as: Jon Stickley and Travis Book; Jerry Douglas and Andy Hall; Tyler White and Kimber Ludiker; and Sam Bush, Casey Campbell and Zach Wooten.

Throughout the weekend, fans gave the new giant LED screen a thumbs up. No matter where you were on the main stage area, the screen provided an up close and clear view of the action.

As the festival kicked off, the IBMM hosted a ground breaking for the new $15.4 million facility. This fully funded project is a collaboration between the City of Owensboro, the State of Kentucky and the IBMM. ROMP tickets include admission to the museum and it’s a must for any bluegrass lover. Kings Highway played at the museum several times over the weekend so you didn’t miss music if you visited the museum. 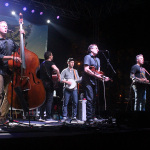