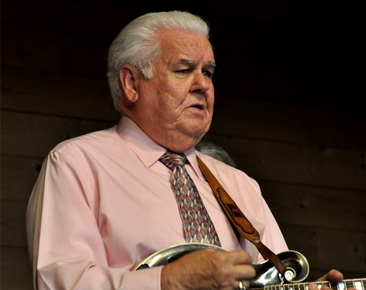 On March 30, 1935, Paul Williams was born in Wytheville, Virginia. He was raised in eastern Tennessee.

“Williams” was actually the stage name for Paul McCoy Humphrey. It was the name that he adopted when he joined the Lonesome Pine Fiddlers in the summer of 1951.

I’m getting ahead of myself; Humphrey’s love for music and the Lord began at the early age of nine when his father bought him an “A” model Gibson mandolin to play in prayer meetings and church services.

Later he played with his brother Jimmy, apparently using the name, the Williams Brothers.

However, his primary instrument while with the Lonesome Pine Fiddlers was the guitar. Actually, it was his excellent, clear tenor singing that attracted fans as Williams took the role of lead vocalist in the group.

At the time the Lonesome Pine Fiddlers were signed to RCA Records and in May 1952 they had their first session, cutting four songs, three of which, You Broke Your Promise, I’m Left Alone and Nobody Cares (Not Even You), Williams had helped to write.

While with the group, Williams was involved in two further recording sessions. They cut 10 sides, two of which, My Brown Eyed Darling and That’s Why You Left Me So Blue, he had written.

In 1957 Williams went to work with Jimmy Martin, helping to shape Martin’s sound, playing mandolin and singing tenor in what has been described as Martin’s classic line-up. Young banjo player J.D. Crowe was part of the Sunny Mountain Boys at the time as well.

Williams continue to write. Some of the songs that he wrote during his time with Martin – Steppin’ Stones, My Walkin’ Shoes Don’t Fit Me Anymore, Hold Watcha Got, Don’t Cry To Me, Prayer Bells Of Heaven and I Like To Hear Them Preach It to name just a few – are considered bluegrass music and bluegrass Gospel classics.

From 1958 through to 1960 they were big stars on the Louisiana Hayride, rivalling Elvis Presley in popularity.

During the following two years the Sunny Mountain Boys worked on the Wheeling Jamboree in West Virginia, before Jimmy Martin re-located to Nashville in the hope that he would be invited to work on the Grand Ole Opry.

In 1962 Williams married Martin’s half-sister, who influenced him to stop playing bluegrass music and devote his life to the Lord. In August of the following year he retired from the bluegrass music circuit, taking a job with the U.S. Postal Service in Morristown, Tennessee. Nevertheless, he continued to write songs and play in churches and for Sunday morning radio broadcasts for the next thirty-three years.

In 1995 Williams formed the Victory Trio, a bluegrass Gospel group. His retirement from the Postal Service in 1996 allowed him to resume performing full-time.

While the group was an immediate regional success, it took four years and the right breaks to achieve national recognition. That manifested itself as their second self-produced album Old Ways & Old Paths was re-released by Rebel Records and subsequently nominated for a Grammy in 2000 in the Best Southern, Country or Bluegrass Gospel Album category.

Some of the songs that he wrote for the Victory Trio were listed in the name of Paul Humphrey. These include He’ll Never Let Us Fall, She’s Not Home Yet, The Journey and That’s What Heroes Do.

Paul Williams has released two albums in his own name, one for Rounder Records and one for Rebel Records.

10 additional albums were released with Williams fronting the Victory Trio, all released by Rebel Records.

Another highlight of the past decade has been his contribution to the Grammy nominated album A Tribute to Jimmy Martin: The King of Bluegrass (2004).

In 2010 Williams teamed with Doyle Lawson and J D Crowe for a release, Old Friends Get Together, on Mountain Home Records. The trio, who performed several concerts together also, followed that with Standing Tall & Tough.

At the close of 2013 Williams retired as a touring musician.