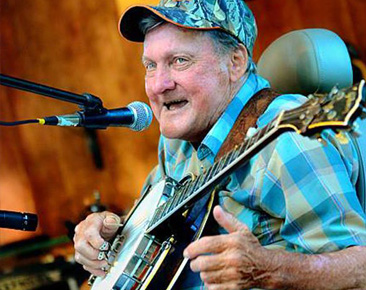 Johnny Lee Vincent was born into the musical Vincent family on October 18, 1940, at Button Ridge, Missouri, the fourth and youngest child of Bill and Erma Vincent.

As a young boy, he loved to play baseball and other outdoor activities such as hunting, shooting, fishing; playing checkers and pitch; and talking to his CB friends.

Vincent began singing at an early age and soon picked up the guitar. Eventually he mastered many stringed instruments, although ultimately he became noted for his individualistic banjo playing.

All the family were musically inclined; his grandfather, his father and his uncles, Dave and George. He grew up performing with them all, sometimes on the family’s radio show.

By the age of 11 he was playing bass with a country band. During the 1950s he played banjo with his dad and uncle in a band called the Lazy River Boys.

The Vincent family made their first recording when Johnny Vincent was just a young teenager; he sang Your Cheatin’ Heart.

He attended school in Jim Town, Missouri. At the age of 16 Vincent began working at the shoe factory in Kirksville, Missouri.

On May 29, 1961, he married Carolyn Thompson and they settled in Greentop, Missouri.

Their first child, a daughter, Rhonda Lea, was born on July 13, 1962. Two sons following in the ensuing years,  Darrin Lee, on December 27, 1969, and Brian Alan, on January 25, 1974. The two older siblings are among the top bluegrass performers of the century, Rhonda leading her band, The Rage, and Darrin co-starring with Jamie Dailey in one of the finest duets of the last decade. Brian, an accountant, sings and plays guitar and mandolin. All three made their bluegrass debuts in the family band, The Sally Mountain Show.

In October 1964 Johnny Vincent was seriously injured in a car accident near Worthington, Missouri, which, due to a broken neck, left him paralysed and confined to a wheelchair. He regained partial mobility, walking with a cane until in recent years when he relied upon a scooter to get around.

Music became even more of a focus after his accident. There was a music party almost every night at the home, which drew a multitude of musicians who loved joining in the nightly jam session. In 1967 the family secured a local TV Show on KTVO Television, in Ottumwa, Iowa, and a weekly radio show on KIRX Radio 1450AM.

When Johnny Vincent’s father passed away in April 1972 that changed the shape of The Sally Mountain Show. From then on the band just featured Johnny’s immediate family, Carolyn and Rhonda. They performed as The Sally Mountain Trio until Darrin was old enough to join the entourage. The band became well known for its signature harmony vocals, enhanced further by Brian’s voice which is reminiscent of Bobby Osborne’s.

After performing at several bluegrass festivals, Johnny Vincent discovered that the close-knit family could make a living playing music. The band grew in popularity and gained national attention in 1981, the year that they were signed by Lance LeRoy of the Lancer Agency.

Vincent and his family toured the world, performing their special brand of bluegrass music. He was known for his unique banjo style along with his smooth vocals.

In 1986, he bought 63 acres in Queen City, Missouri, and made one of his greatest dreams come true by hosting his very own bluegrass festival at Sally Mountain Park. The festival has continued for 28 years and lovers of the music travel from around the world to experience the down home hospitality of the family festival.

Having generally been inactive for some years (their appearances at the Sally Mountain Park Bluegrass Festival being the exceptions), in 2003 they reunited to record A Family Tradition album. Rhonda and Darrin performed on the album as did Jamie Dailey and Stuart Duncan.

In 1991 Rebel Records released an album, Bound for Gloryland (CD 1692), which had Rhonda Vincent sharing the credits with the Sally Mountain Show.

Here, the Sally Mountain Show are seen performing on the TNN program Fire On the Mountain in the mid-1980s.

Johnny Vincent died October 5 following an illness. He is lovingly remembered by his large family and many friends.