Daniel Mullins will be reporting from the 2015 Bean Blossom Festival all week, as Internet service in the campground allows. Check back each day for his reports and photos.

The Punches Family and their family harmony returned to start the day. The Wildwood Valley Boys, no strangers to the Hoosier State, brought their wonderful sound and original songs to the stage. One could only reflect on how fitting it was to see band leader, Tony Holt, on the the biggest stage for bluegrass in Indiana, as his father, Aubrey Holt, had done so many times before with The Boys From Indiana.

Hall of Famer, Little Roy Lewis (the sixth of eight Hall of Famers to perform this week) took the stage with The Little Roy & Lizzy Show, and Little Roy’s wide open style of music and showmanship was on full display. I think it is safe to say that Little Roy had more energy than any human being at Bill Monroe Music Park this week. Known for his on-stage antics, Little Roy was beat at his own game when show promoter, Tim Dillman, crashed in on Little Roy’s signature song, Honey In The Rock.

Wednesday also featured a Main Stage performance of the Youth Bluegrass Boot Camp, led by Rickey and Sarah Wasson. The camp has been held at Bean Blossom for over ten years, and this year, nearly eighty-five young folks participated. Bluegrass is in good hands after seeing all of the great young talent on stage.

Danny Paisley and his “pedal-to-the-metal” style of bluegrass got the crowd fired up. His unique manner of singing is an acquired taste for some, but beloved by most as one of bluegrass’ true stylists. Danny’s son, Ryan Paisley is also one of the top young mandolin players in bluegrass today, and showed off for the folks at Bean Blossom. Ryan was not the only second generation ‘grasser who wowed the crowd with his mandolin playing. Jacob Burleson, whose father, Jason, plays banjo for Blue Highway, is now playing mandolin for The Kenny & Amanda Smith Band. Jacob’s effortless approach fit nicely with Kenny and Amanda’s smooth sound. The reigning IBMA Female Vocalist of the Year and her modern guitar legend of a husband could be dubbed bluegrass’ hottest celebrity couple, especially after how hot their band sounded at Bean Blossom.

Bluegrass veteran, Larry Stephenson sounded as good as ever. The Larry Stephenson Band consistently delivers great bluegrass with class to any crowd, and this performance was no exception. Larry performed many songs from his latest Gospel project, one of 2014’s most under appreciated albums. Kenny Ingram’s picking has never sounded better, and the banjo legend fits Larry’s sound like a glove.

To end the day, Dailey & Vincent brought their powerhouse show to the historic Bean Blossom stage. Their show featured a wonderful mix of bluegrass, classic country, and down home fun, as they wowed the audience. The addition of a complete drum set has worked well with the band, and the percussion has complemented D&V’s sound quite nicely, particularly on their more country-leaning material. Jamie Dailey and Darrin Vincent always bring the crowd to their feet, and ensure that their show has something for everyone. Jessie Baker may have been the biggest ham of the show, which is really saying something when you share the stage with big personalities such as Jamie, Darrin, and Jeff Parker. All-in-all, Dailey & Vincent still remain one of the top acts in bluegrass, even if they refuse to be bound by genre restrictions. 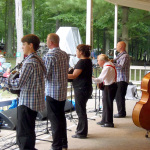