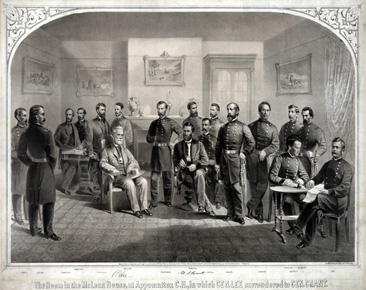 Yesterday was the 150th anniversary of General Robert E. Lee’s surrender to General Ulysses S. Grant at Appomattox courthouse, essentially ending the Civil War. The bloody war which ravaged the United States touched every aspect of our nation. Geography, agriculture, business, industry, politics, and even popular culture. While seemingly less significant than other contributions from this time, such as refusing to allow one human being to own another, the Civil War’s influence musically has allowed Americans of all generations to better understand the War Between The States.

One of the greatest songsters to come out of the Civil War era was Stephen Foster. Known as the “father of American song,” Foster wrote over two hundred songs, many of which have become American standards. Although he began writing nearly fifteen years before the war’s inception, one simply cannot assess Civil War music without Stephen Foster.

One of his most famous numbers, published in 1854, has become not only closely associated with the Civil War, but is viewed as an American classic. While listening to Hard Times Come Again No More, it would be nearly impossible to know it was written years before the first shots were fired at Fort Sumter.

Originally written as a reminder to the privileged to remember those who are not as well off, the poignancy of the song’s lyrics undoubtedly had even greater significance during our nation’s darkest hour. Hard Times Come Again No More has grown to be one of the most beloved songs in the American songbook. Popular recordings of the song include versions by Emmylou Harris, Bruce Springsteen, The Sons of the Pioneers, James Taylor, The Isaacs, The Chieftains, The Nashville Bluegrass Band and more.

Beautiful Dreamer is another Foster classic which has been embedded into American culture. One of Foster’s last compositions, the song was published in 1864 shortly before his death.

A sweet serenade which has captured American hearts for nearly a century and a half, Beautiful Dreamer is obviously a love song. Sung by a lover to the beautiful dreamer, it is unclear why the beautiful dreamer is, in fact, dreaming. As a product of the time from which it was written, it is safe to assume that the song’s recipient is deceased, and the singer is lamenting over his lover’s death.

The hauntingly beautiful tune has been sung at choir concerts and vocal recitals for decades, and has been used in countless movies and television shows including Gone With The Wind, The Secret Life of Walter Mitty, Batman, Little House on the Prairie, Bonanza, Office Space, and more. Well-known versions include those by Roy Orbison, Bing Crosby, Jerry Lee Lewis, Marty Robbins, Dean Martin, and Cowboy Jack Clement.

Some of Foster’s material was directly influenced by the battlefields of the Civil War. Not one of his most popular tunes, but still just as powerful, Foster’s Dear Old Flag was inspired by the tale of a drummer boy at the Battle of Gettysburg. It was co-written with George Cooper and published later in 1863.

This song exemplifies the horrors of the battlefield. It is sad every time a soldier dies, but it is particularly heart-wrenching when an innocent child passes away due to the brutality of war. The drummer boy is still just as proud to die for his country as if he had been fighting in the front lines. This is not one of the most well-known Foster songs, but it is a tremendous tune that is directly related to the Civil War. There are very few recorded versions of the song, but Vince Gill did a beautiful rendition with The Isaacs and The Whites, which is included on the 2013’s Divided & United: The Songs of the Civil War album. A more uptempo version of the song was also the final single to be released by American Drive.

There are several other popular songs from the Civil War era which depict actual events on the battlefield. Marching Through Georgia was written by Henry C. Work following the war’s conclusion.

A salute to Sherman’s March to the Sea, this lively number is a great rallying song for patriots.

“Sherman’s dashing Yankee boys will never reach the coast!”
So the saucy rebels said and ’twas a handsome boast
Had they not forgot, alas! to reckon with the Host
While we were marching through Georgia.

Hurrah! Hurrah! we bring the jubilee!
Hurrah! Hurrah! the flag that makes you free!
So we sang the chorus from Atlanta to the sea
While we were marching through Georgia.

While there have been several recorded versions by a variety of artists including Tennessee Ernie Ford and Joe Maphis, the new rendition by the Old Crow Medicine Show is quickly becoming the most popular. The popular string band are among the newest members of the Grand Ole Opry and are known for their rousing live performances. Their recording of Marching Through Georgia is also included on Divided & United: The Songs of the Civil War.

A fun tune which draws on the Union campaign to capture Richmond, Richmond Is A Hard Road To Travel is one of the most historically “cram-packed” songs from the Civil War.

The song goes on to tell of the many leaders of the Union Army and their failed attempts to capture the Confederate capitol of Richmond, VA early in the war. Mentioning such Civil War leaders as Irvin McDowell, Stonewall Jackson, P.G. T. Beauregard, Joseph Eggleston Johnston, John C. Fremont, Nathaniel Banks, George McClellan, James Longstreet, Abraham Lincoln, Jefferson David, John Pope, and Ambrose Burnside. An adaptation of Jordan Is A Hard Road To Travel by Daniel Decatur Emmett, such Civil War events as both Battles of Bull Run, McClellan’s Peninsula Campaign, the Battle of Fredericksburg, and more. The most memorable rendition of this song comes from Chris Thile and Michael Daves. Although filled with history, the song is light and fun. Thile and Daves’ brother style interpretation has you singing along by the end.

There are many other songs from the Civil War era illicit recollections of the most significant war in our nation’s history. Songs such as The Battle Hymn of the Republic, Lorena, When Johnny Comes Marching Home, and Bonnie Blue Flag immediately cause Americans to pause and reflect on our nation’s history. However, undoubtedly, the song most closely tied to the Civil War is Dixie.

During the Civil War, Dixie was the unofficial national anthem of the Confederate States of America. Ironically, the song was written by the leader of a minstrel troupe, Dan Emmett. The song was meant to be performed in blackface, and was originally written from the perspective of a freed slave in the North longing for the Southland where he grew up. Ironically, although written in the North, Dixie became embraced by the South.

During the war, various renditions were used to depict Southern and Northern support. The term “dixie” is a slang term in reference to the Mason-Dixon Line, and the song’s popularity helped cement Dixie as a name for the South. Due to the song’s historical connection to the Old South, Dixie is often a source of contention. Northerners point to the song as a symbol of racism and the Confederacy, while Southerners hold to Dixie as a symbol of Southern identity and culture.

Few songs hold the versatility of Dixie. It can be performed in a bold, uptempo manner with a ragtime or Dixieland flavor which harkens to the song’s use as a rallying cry for the South (or a bash on the South by the North). However, by slowing the song down, it becomes a beautifully sad song of longing for and recollection of home. Regardless of the song’s history, it is closely tied to the Old South, and has become the song most associated with music of the Civil War.

These are just a few of the many songs which came out of the War Between The States. Their addition to America’s rich musical tapestry, is one of the few bright spots of America’s darkest hour.

This article by no means covers all of the songs from the Civil War era, and doesn’t claim to. What are some of your favorite songs from and about the Civil War? Let us know in the comments below.